At Sun City West Assisted Living, Florence W., 101, Janet O., 104, and Lucille D. — who will be 99 in August — are sharing their secrets to longevity. One says there is no secret, another says it’s from healthy eating, and another states that it comes from hard work and dedication. Their stories were featured on local news outlets:

Read more about these three centenarians (with Lucille not far from reaching 100), below: 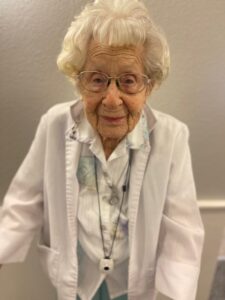 Florence was born in Missouri Valley, Iowa. She was married to her husband, Bob, for 64 years, and they have three children, one daughter, and two sons. They share one grandson. Bob worked in New York City for 64 years. Florence likes to listen to books on cassette tapes, attends exercise classes at the community, and listens to all kinds of music.

She states that there is no secret to longevity, and says, “God has just been good to me.” She has been a resident at Sun City West Assisted Living since 2018. 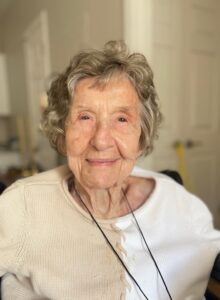 Janet is from Pittsburgh, Pennsylvania, and has been at Sun City West Assisted Living for almost a month. She was married to her husband, David, for 54 years. They are both very active. Janet loved playing golf and tennis. She enjoys watching it on TV, too. Janet also enjoys playing bridge and listening to music. She has three children and seven grandchildren. Janet was a housewife for many years, however, during the last couple of years of her husband’s career, she worked in his ophthalmology practice. In addition, she was a caregiver to her mother for eight years.

Her secret to aging: “Well, it’s in my genes. My Mom lived to be 103 years old.” She also states that she ate healthy, home-cooked meals and plenty of vegetables. 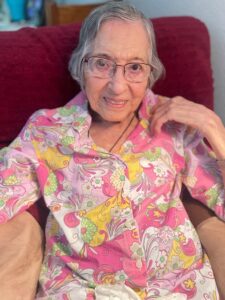 Lucille comes from San Luis, Colorado. She has been a resident for seven months now. Lucille was married to Adlemo, who went by Al. They share two daughters, four grandchildren, and three great-grandchildren. Lucille loves working on puzzles, sewing, and bowling.

Lucille grew up working at the age of 14, picking weeds on the farm. She eventually transitioned into working for large department stores and was a receptionist for the last six years of her work history. She worked until she was almost 70 years old. Her husband worked as a carpet cleaner and then eventually owned his own cleaning company. He also worked until he was almost 70 and transitioned to working part-time as a limo driver for the last six years of his work history.

Learn more about our community by signing up for a tour today.