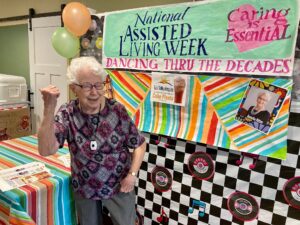 Senior living community Broadway Mesa Village is “Dancing Thru the Decades” to celebrate National Assisted Living Week! Each day of the week honors a different decade, and our assisted living and memory care residents are dressing in iconic fashions from each period! 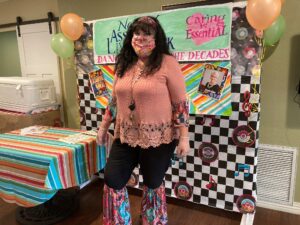 Life Enrichment Director Teresa Hadley arranged for several vendors to provide snacks and refreshments that were popular during each decade. Between noon and 1 PM each day, treats will be served. On Monday, September 14th residents twisted the night away and rewarded our twisters with ice cream drumsticks.

Residents also reflected on their memories of the 50s. “Every Friday night I’d be at the dance with my boyfriend Gary. He wore black pants and a pink shirt, and I wore a black shirt with a pink blouse,” said Nancy Rinehimer. Beverly remembered how excited she was in 1956 when she finally gave birth to a baby girl after having two boys. Will reflected on his days as an Elvis impersonator at the local mall. Crowds surrounded him as he crooned the King’s toons.

Residents recalled going to the soda fountain after school, eating French fries and drinking Green River Fountain. “My aunt wore a dress and heels in the kitchen all throughout the 50s and 60s,” says Nancy. Dorothy Freye and her husband had an A&W root beer stand, and one time the singer and actor Fabian Forte stopped by to get a root beer. The carhop was so excited, and Dorothy’s husband let her keep the unwashed mug he drank from!

On Tuesday, September 15th, Broadway Mesa residents and associates dressed as hippies and bohemians to celebrate the 60s! East Valley Hospice donated coke floats while we danced the “Hitchhiker” to The Beatles and found out what our “Flower Child” names are. Everyone was smiling and enjoying the happy times. “When you are surrounded by friends and people who love and care about you, life is good,” said Teresa.

Residents again recalled their memories of the 60s. Most of our residents do not think of Elvis or The Supremes during the 60s; they were busy raising their families. Other residents mentioned that through the 60s it was tough, especially for women. The only jobs really open for women were secretary, salesgirl, nurse, and so forth. Very few women had the opportunity to go to college.

Medicine was also very different back then. “I was up 4 to 5 times a night with my little son who had asthma,” says Dorothy. Dorothy herself suffered from anemia, and her doctor gave her blood transfusions as treatment. He told Dorothy that he could not see how she could keep up with her four children and running a household considering everything she had to deal with. Dorothy and her husband eventually sold their farm in Iowa and moved to Arizona where the climate and a new drug helped their son feel better. Often many people wonder about going back to a simpler time when we are presently handling so much. Nonetheless, residents and associates alike are grateful for the gift of modern healthcare.

Wednesday, September 16th was Dress Up 70s Day, and residents and associates decked themselves out in disco garb! Broadway Mesa Village provided the pizza, and we flaunted our best disco moves while “Stayin’ Alive”! 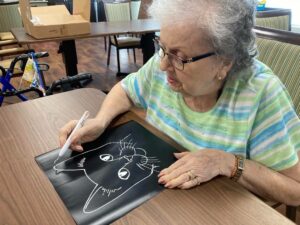 70s day was also the day of our first silk screen lesson! This is an exciting new activity at Broadway Mesa Village. Nora, Beverly, and Nancy learned how to weed vinyl, get it prepared for the screen and squeegee ink over their own T-shirt or tote bag. “Next week we’ll be making masks with ‘My friends at Broadway Mesa Village make me smile’ printed on them,” said Teresa. The residents are thinking about other ideas for silk screening, including making walker bags and shopping bags. No one knew there would be so many steps in making the designs, but still everyone had a blast! “It’s such a fun project,” said Nora.

On Thursday, September 17th, our Mesa seniors judged who sported the brightest leggings and danced to the 80s “Sprinkler”! Sante of Mesa provided sloppy joes for the occasion.

Finally, on Friday, September 18th, our residents are reminiscing about the 90s, dressing up as beanie babies and grunge stars! The 90s favorite soft pretzels are being served by Homestead Health, and a Britney Spears lip sync contest is scheduled!

Stay tuned for more details of the festivities and plenty of fun pictures! Go back in time with Arizona senior resort Broadway Mesa Village.